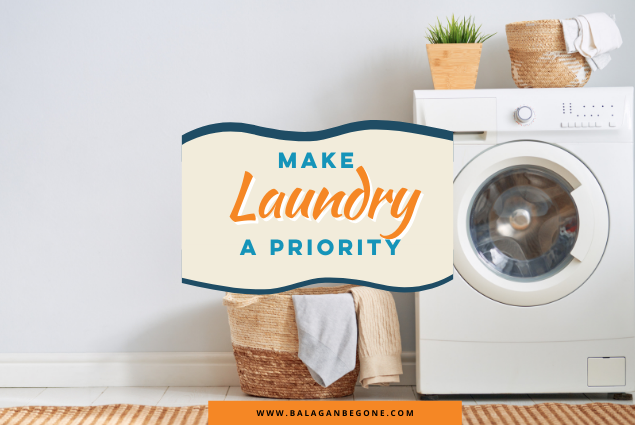 When I was growing up in the US, we had a washing machine in the house.  It was in the basement, so it was a bit irritating to walk down the stairs with our baskets every time. But the good thing was we had a laundry shoot – so all the dirty clothing was already down there! All we had to do was sort it, and put it in the machine. As an American machine, it was a fairly large machine and we only did laundry a couple of times a week.

But when I got married we lived in New York and in our building we had a shared laundry room in the basement of the building.  And in terms of time management, it made getting laundry done easier! (For the most part!)

I made one day during the week my laundry day. I would set aside three hours of time to do it using 4 washing machines all at once and then all 4 dryers for the clothing to be dry all at once as well. Then I would stand there, fold it, and get it all done in one shot.

It was a task-  but at least it was done in one day.

However, today, living in Israel, I have a much smaller washer and dryer than I had as a kid (and even when we lived in NYC!) and so laundry is done almost every day.  And some days- it sits in the basket, waiting for someone to fold it and put it away!

But why does laundry tend to take so long to do?

Part of the reason is we forget to go back to it because it isn’t a priority to fold it and put it away once it is clean.  It isn’t a ‘’set it and forget it’’ thing.

So today’s tip: Set a reminder for yourself.

Do something like putting the laundry basket on your sofa, and don’t sit down and move it till you take care of it.

Also, get your kids on board! Little kids can sort out their stuff, match socks, and even fold some items. Don’t get precious about folding though – if it isn’t perfect that is fine.

The bigger kids can sort, fold, and put away their own clothing.

I set up a system for my kids where each type of clothing is in baskets and I tell them “I don’t care if they just sort it into the baskets, as long as it is away!”

What do you do to keep laundry under control? Let me know in the comments!

Do you need help with time management?

Check out my It’s About TIME – time Management  course